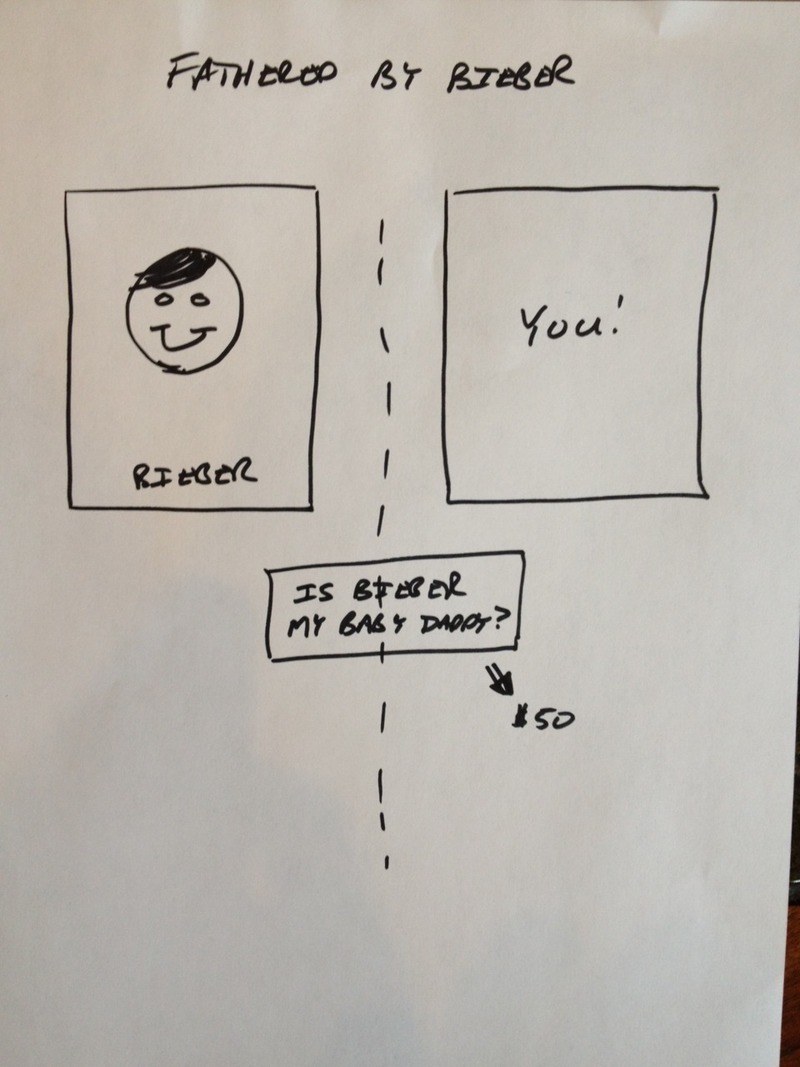 Recently Justin Bieber was accused of being the baby daddy of a woman’s child. I was thinking that pretty much anybody can accuse him of being the father of their child and cost him a lot of money each time. So I thought, why doesn’t he just submit to a paternity test once and then let whoever wants to pay a little money see if the Bieber is their baby daddy. 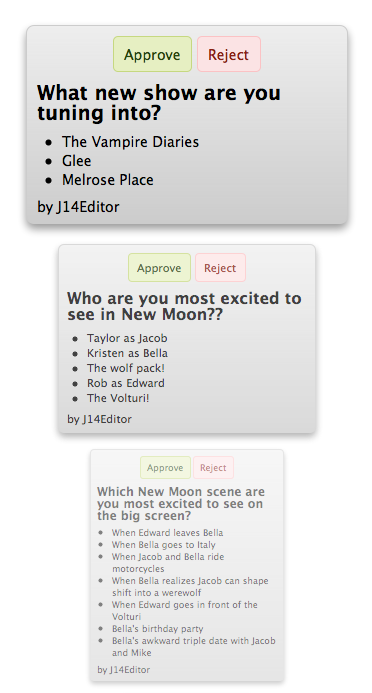 “Just a note of thanks. The users are really liking Stacks over our old program and finding it to be very helpful. Thank you for all your time in designing and programming this site for us! You’ve done an excellent job and we really appreciate it!”

~Josh Balmer (RE: an app I built for them to manage truck loads of propane) 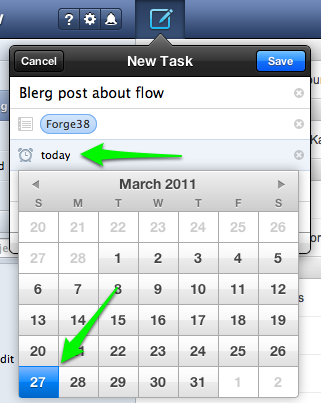 I’ve been using Flow for a couple of weeks now and loving it. The main reason I love it is it is individual-centered and not company-centered. My wife and I can each have an account and share a project called “home" as well as share other projects with people who I am working with.

There are many little details throughout the app, but this one made me smile. You can enter “today", “tomorrow", “1 week", “3 days" as the due date and it will automatically figure out the due date.

Last Saturday was Barcamp Philly and it rocked (thanks to you @jptoto, @stellargirl, and @kelaninichole)! The first session I went to was titled “Web Apps and Hookers" which was presented by the dynamic duo of Allan Branch and Steven Bristol of Less Everything fame.

Sadly, I have to admit, before I met those guys I wasn’t huge fans of them. I thought they were kind of arrogant. However, all that changed when I got a chance to hang out with them at LessConf last month. I can truly call them friends now and they are some of the nicest people I have met.

Ok, back on topic! They had many nuggets of advice but the most important segment in my mind was the part about partners. They went on and on about how important they are. At one point they asked if anybody was starting a business without a partner to which I raised my hand. Their basic response was “you need a partner" but Steve mumbled at the end “except Randy, he’s spot on". Ok, that had me glowing a little bit. However, I do understand the importance of a partner and wish I had one.

I am surrounded by very very awesome people but I don’t know if I have met someone that would pass the 3 AM call test. I’m not sure if this was their original idea, but basically the 3 AM test is if a potential partner would pick up the phone when you call at 3 AM instead of silencing it and going back to sleep, then they are your person. I think this is a great test and one I’ll be using going forward.

The part I haven’t figured out is how to keep from offending the people you don’t choose to be your partner. Any ideas?

(: PS I promise I’ll stop gushing about the Less Everything dudes for a while, I don’t want them to get any ideas :)

Please bare with me as I tell a story about my trip home from LessConf!

It was 1:30 PM on the Monday after LessConf and I had just checked my baggage with Southwest and was heading to security at the Jacksonville airport. As I was about 100 feet from the entrance to security, I noticed there was a Nathan’s hot dog place to my left and I hadn’t eaten anything yet.

Realizing I had plenty of time before my flight, and wanting food I would later regret, I headed over there and purchased a hot dog and cheesy hash browns (OMG they were so good!). I finished chowing down in about 1 minute 46 seconds, picked up my trash and headed to the trash can. I threw out my trash and reached in my pocket to fetch my receipt to throw away as well.

Then I got really excited because I realized many other travelers probably face the same dilemma! What if we took advantage of this and gave them the option, when removing change from their pockets, to either put it in their shoe in one of those plastic buckets or one of those buckets collecting change for charity?

I really think this is a great way to raise massive amounts of money for charity. Does anybody know where I would start to get something like this implemented?

I bought a motorcycle. A Suzuki DRZ400SM to be more exact. I took the PA Motorcycle Safety Course last October and received my license in anticipation of this day.

I wasn’t planning on buying one until the Spring but there were a number of reason why I did. First, we have had some incredibly warm days for February and not having a motorcycle was driving me crazy. Second, it was a Friday and work was driving (no pun intended) me crazy so I took the afternoon off and went looking at motorcycles. Third, I found out the bike I was planning to get was in stock and $600 less than if I bought it in the Spring.

SOLD!!! Well, to me at least. I talked to the wife and she was cool with it so went the next day and put down a down payment. A week later, Saturday, she was dropping me off to drive it home. The first day of riding, yesterday, was terrifying. I hadn’t ridden since October and even then it was in a parking lot.

That brings us to today, my second day of riding. I am no longer terrified and actually starting to enjoy it. I plan to ride this bike back and forth to our office in West Chester so I decided to try riding it with a messenger bag and it went ok. I do not have a strap on my current bag to go under my other arm to hold it steady which may end up being a problem. I have been looking at a larger bag with all the right straps but I haven’t decided if I want to drop the $$ to get it.

So John Young and I received our first batch of Nerd Merit Badges yesterday and threw up a website to collect information from people who are interested.

Patch 01: Contributed to Open Source - The thing that started it (for me at least) was contributing some fixes and enhancements to a few open source projects hosted on GitHub which made me extremely happy that I was able to give back. Some of you may not be familiar with Git or GitHub, but I believe the combination of the two has really encouraged people to contribute to open source projects. I know I wouldn’t have taken the effort to submit a patch if it wasn’t for GitHub. The image on the patch is that of GitHub’s “mascot", the Octocat. If you haven’t looked into Git or GitHub, I highly suggest you do since they are great tools and lower the barrier to entry to contributing.

Side note: I understand we’re going to get some criticism for the image we chose but I don’t really care. It’s mostly going to be from people that won’t use new tools just because they think they are “trendy" or think they earned something “more" than someone else. If you have given back to the community in any way, even just 1 little bug fix, I think you should be proud and deserve to be acknowledged.

Structural engineer turned web developer. I like to make things like @DeadMansSnitch (sold) and @NerdMeritBadges. The noun, not the adjective.
Browse the Archive »